In August 2002, the NPD party held an election campaign tour in several cities in Hesse. Almost all events and also their rally in Kassel on 30 August 2002 were disturbed by antifascist protests and some even had to be discontinued. The NPD didn’t manage to mobilise a large number of supporters, only in Kassel about 30 Nazis congregated.

At least 20 of them were members of the militant neo-Nazi scene of Kassel and Göttingen and were seeking violent confrontation with protesters. Stephan Ernst was part of this group. After the NPD rally ended, a spontaneous antifascist demonstration led past a store being used as an extreme right meeting point back then. The group of neo-Nazis gathered to protect „their“ store.

Stephan Ernst was among many participants identified on several pictures taken on this afternoon. Besides Michel Friedrich and Mike Sawallich, mentioned below, Markus Eckel was also involved. Eckel is a leader of Kassel neo-Nazis, and active in «Arische Bruderschaft» of Thorsten Heise and was taking part in a «Combat 18» meeting in Eisenach in 2018. 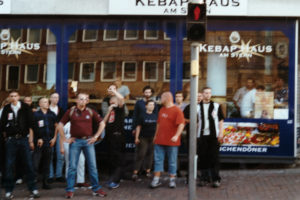 Kassel 2002: Stephan Ernst (right) and to his left wearing a red t-shirt Markus Eckel. Just behind Eckel is Stephan Pfingsten (light blue shirt) and behind him, left of the window is Martin Gotthardt (blue sweater). – Copyright: NSU Watch

Stanley Röske, leading figure of «Combat 18» Germany, newly founded in 2014, also took part. Neo-Nazis Stephan Pfingsten and Martin Gotthardt from Göttingen were also present on August 30, 2002. In 1999, the pair was involved in a seriously militant neo-Nazi group responsible for several attacks in Göttingen. Police found material and manuals for building incendiary and explosive devices while raiding their homes in November 1999.

This can be an example for the Kassel/Göttingen area neo-Nazi scene’s militancy and affinity to terror during this time. Without a doubt it can be assumed that Stephan Ernst knew the pair from Göttingen personally. But, being at the NPD rally together cannot prove Ernst being involved with them more closely on a personal or political level.

Furthermore, it’s clear now that Ernst has been living in a single family house Kassel for about 14 years and didn’t move to Kassel recently.

Ernst’s shooting club states that none of their weapons have been stolen. Authorities confirmed that Ernst isn’t licensed to own a weapon.

Autonome Antifa Freiburg reports a donation of 150 Euro by Stephan Ernst to the AfD party. The 2016 election campaign donation was meant for the particularly radical regional sector of the AfD in Thuringia. 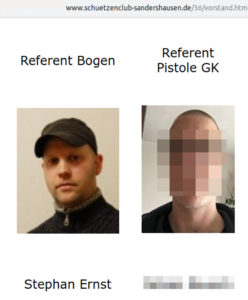 Currently, Stephan Ernst is a board member of the shooting club «Schützenclub 1952 Sandershausen e.V.», located in a district of Niesetal near Kassel. Even though Ernst is presented as „specialist for archery“ on the website of the club it can be assumed that as a member of a shooting club he’ll have easy access to .22 caliber handguns, popular with sport shooters. Based on our information, this is the type of weapon with which Lübcke was murdered. Apparently neither Ernst’s affiliation with the neo-Nazi scene nor the fact that he tried to kill people with a pipe bomb in the past led to restrictions on his access to firearms.

On Saturday June 15th, 2019 neo-Nazi Stephan Ernst (born September 21, 1973) was arrested in Kassel. He is suspected of having killed Walter Lübcke, president of the Kassel regional administration. According to current information, the case is based on DNA traces found at the crime scene matching the arrested suspect. CDU politician Lübcke was shot at close range with a short firearm on the terrace of his home in Wolfhagen (northern Hesse) on 2 June 2019. Immediately after the crime, it was considered likely that the murderer could be a member of the far right spectrum, because Lübcke was an outspoken critic of the far right in the debate on the reception of refugees in 2015 and faced an enormous amount of hatred for his position. 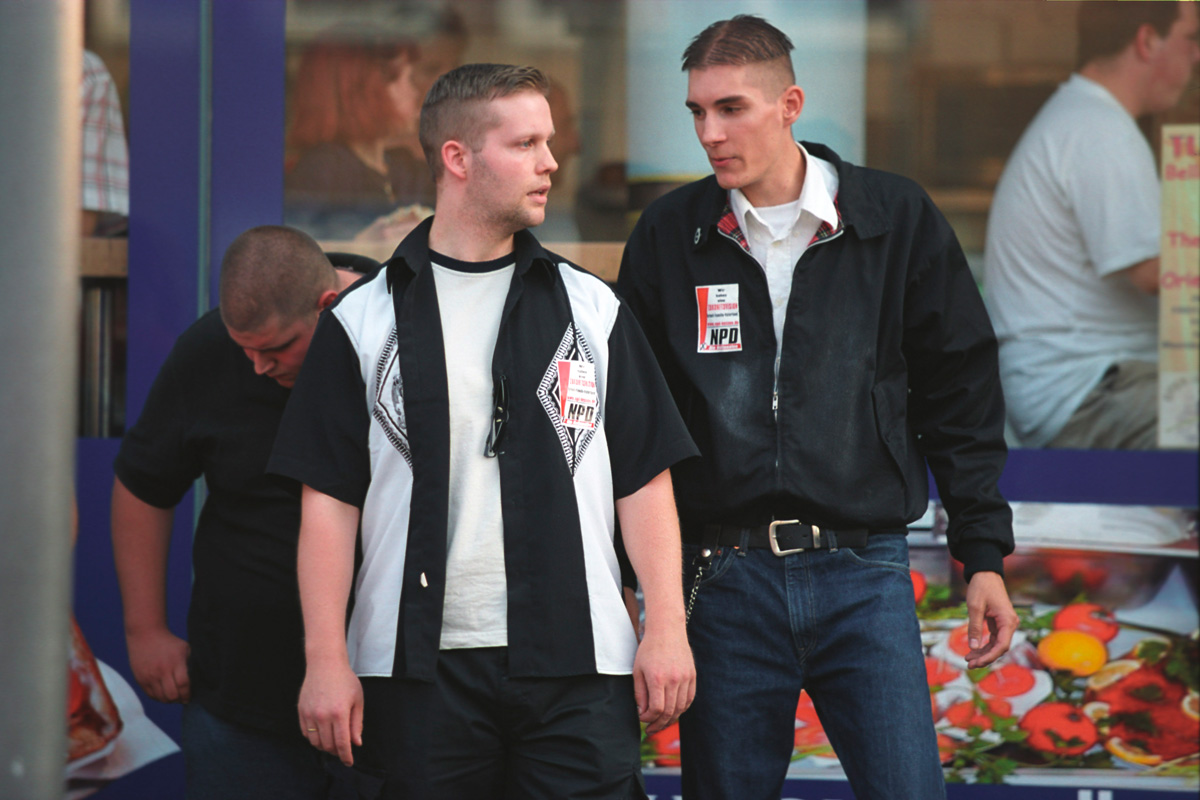 Stephan Ernst (center) on 30 August 2002 at an election campaign rally of NPD in Kassel. To the right is Mike Sawallich. – Copyright: NSU Watch

Stephan Ernst, 45, from Kassel has been known to antifascists since the beginning of the 2000s. In the 2000s he was part of the close circle around neo-Nazis Michel Friedrich and Mike Sawallich. He participated in NPD rallies and at least in one graffiti action and was involved in a brawl between antifascists and neo-Nazis in 2007. Mike Sawallich was a leading figure of the Kassel neo-Nazi scene. Michel Friedrich was part of the «Oidoxie Streetfighting Crew», a group that back then claimed to represent the German branch of «Combat 18». Friedrich came into the public’s focus most recently in 2015, when an antifascist research group uncovered an upcoming weapons deal in which Friedrich promised „2 to 3“ live firearms to a leading German member of «Combat 18». On May 1st 2009, Ernst traveled to Dortmund with six more neo-Nazis of the Kassel neo-Nazi scene and was involved in an attack on the national trade union’s demonstration. He was arrested there.

A former neo-Nazi warned in the 2000s that Ernst was a „very dangerous guy“ and had been sentenced to several years of prison for attempted or accomplished manslaughter. As Zeit online reports, this refers to an attack on a refugee center in 1993 in Hohenstein-Steckenrodt in Hesse. Ernst planted a pipe bomb that residents managed to defuse just in time before the explosion. In 2016, Ernst was discussed at the Hessian Committee of Inquiry to Investigate the Crimes of NSU, the «National Socialist Undergroud». He was mentioned as an example for violent neo-Nazis in Kassel by the party Die Linke in an application for evidence. Benjamin Gärtner, neo-Nazi and informant for the secret service, confirmed to deputy Schaus that he knew someone called „NPD Stephan“. But it’s striking that even the committee of inquiry investigating the militant neo-Nazi scene of Kassel for years didn’t receive information about the attack in Hohenstein-Steckenrodt, even though it was committed by a neo-Nazi who lived at least since the beginning of the 2000s in Kassel. During the past years Ernst is said to have lived in southern Germany. Rumour says that he moved back to Kassel just recently.

Many signs indicate that Ernst had at least ties to the network of «Combat 18». Possibly he was more deeply involved. One leading figure of the German offshoot of «Combat 18» is Stanley Röske who used to live in Kassel and knew Ernst since the early 2000s. In 2018, Exif published it’s research about this neo-Nazi network with terrorist ambitions. It’s quite obvious that this network is riddled with informers of several agencys and secret services and is thus being played down and held on a long leash by the authorities, especially by the secret service.

All new information will be included in this article.